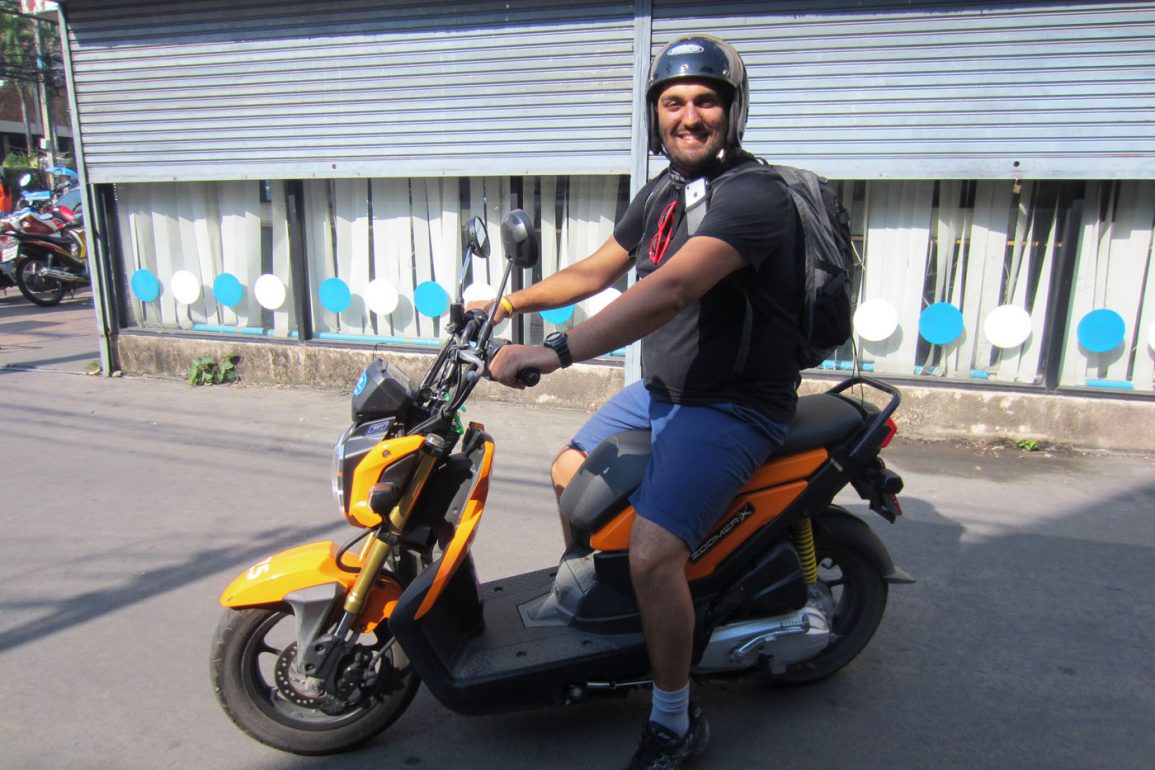 How to Ride a Moped in Thailand

Getting about in Thailand is fairly easy. With big tuk-tuks, little tuk-tuks, mopeds, bus’s, taxi’s and some quick rails (BTS) there are plenty of options.

There is one however that you can give a go yourself and is my personal favourite. As someone who used to ride a 600cc Suzuki GSXR, I love a good set of 2 wheels with a motor attached.

The moped in Thailand is as abundant as the the street food stalls and also as cheap. At roughly £4 per day, you can get a good standard bike for 24 hours or if you hire one for longer then less than that.

How to Ride a Moped in Thailand

But that aside, it’s the actual riding that can put a lot of people off. We are spoiled in the west that we have road marking and lights that people actual acknowledge and believe should have some degree of control and influence on the way they drive. In other parts of the world, things are a little bit different.

Take a dual carriageway for example. 4 lanes, 2 going one way and 2 going the other, usually with a barrier in the middle. The norm is to go in the direction of traffic and if you need to go the other way then go the correct way until there is a roundabout or crossroads or opportunity for a U-turn. However in Thailand, it seems to be perfectly ok to go the wrong way down a road if you are in the hard shoulder, going either fairly slowly or really fast.

How about pavements or sidewalks? In Chiang mai this happens less but in Bangkok you’d be forgiven for thinking as a pedestrian you are in the wrong for using a footpath. While in the UK cyclist have been given the oust from pavements and must ride on roads, in Bangkok, pavements are fair game to mopeds and you can easily get caught out by a stray wing mirror while walking to the 7/11.

The fact is however, this doesn’t actually happen much, getting hit. There is a strange force in Thailand that gives traffic a type of synergy. Everyone seems to know what everyone is doing in general. So it works out ok. I image Bombay being similar but with more cows. The main bit of advice I can give is –

“Make a decision and stick with”

When driving or even walking in areas of traffic like this, the worst thing you can do is start to manoeuvre and then back out, or start to cross the road and then bottle it. This is because if you decide to do something, along as it isn’t something silly like walk out in quick moving heavy traffic, the drivers around you will adapt their direction to accommodate you. If you change this, they have less time to change again and it makes it dangerous for involved.

It’s normal in Thailand for hire places to keep your passport as deposit. Not a photocopy, the actual thing. You will have to leave a massive cash deposit, close to the value of the bike if not. I think there should be some middle ground as leaving 50,000baht with someone is excessive and it’s actually illegal to not have your passport on you as a foreigner in Thailand, though I’ve not heard this ever enforced.

So, enjoy biking, I recommend it. Be careful, there is no NHS or Medicare in Thailand.

What are you looking for?

Welcome to Awesome Wave - a travel blog focused on wellness, culture, and luxury.

We seek to share, inspire, entertain and hopefully help you on your own adventures both at home and abroad.